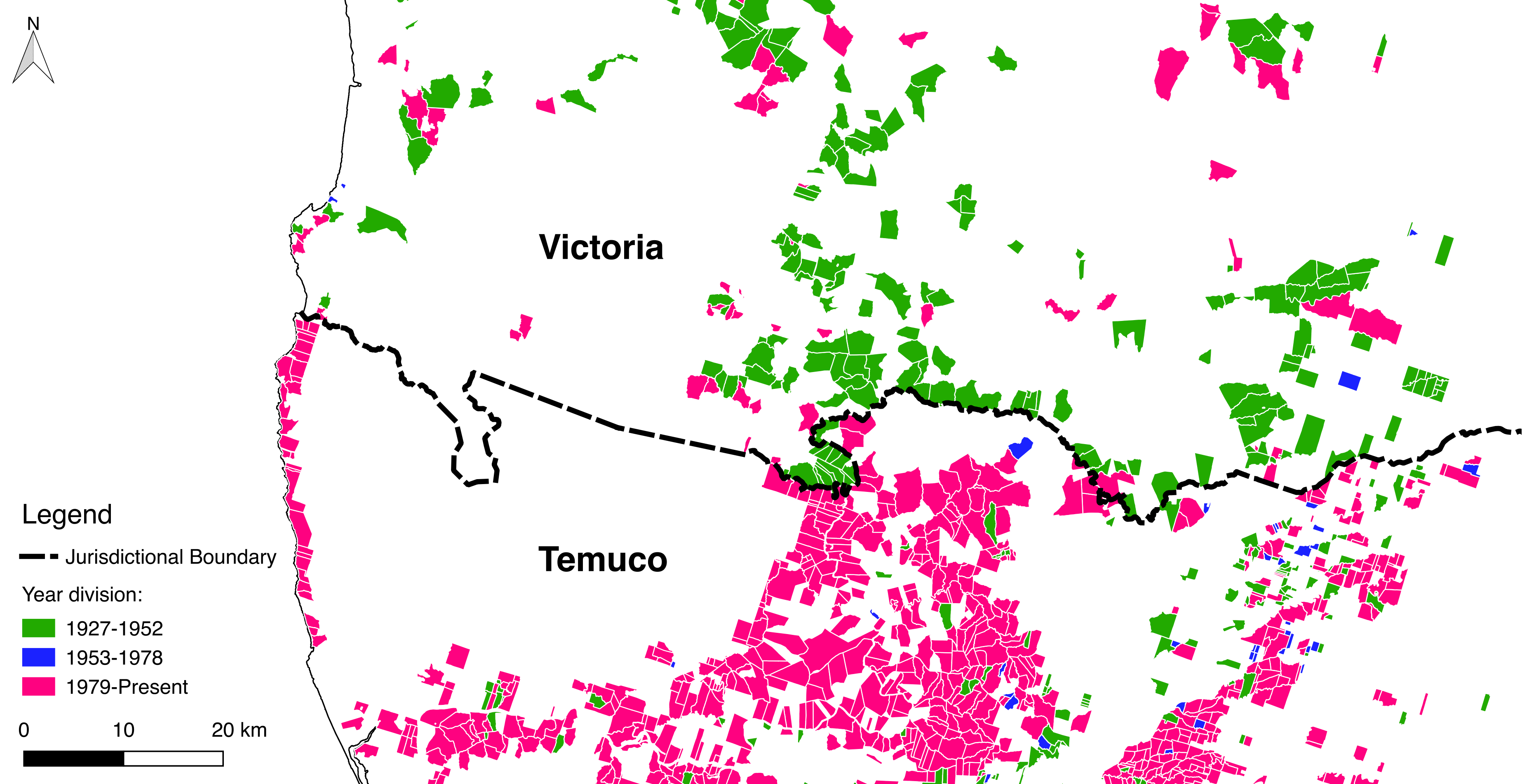 National courts, property rights, and the transformation of an indigenous society

Indigenous lands are increasingly being integrated into national property rights systems, formalizing indigenous families’ claims to lands but restricting traditional institutions’ authority to enforce property rights. This paper leverages historical differences in court congestion across jurisdictions to estimate the long-term impacts that such a reform had on Chile’s largest indigenous group, the Mapuche.

Forestry plantations and the demise of rural livelihoods

As part of global targets to reforest the world, many developing countries have made ambitious commitments to rapidly expand the area of plantation forests. In many cases, these commitments have been motivated by a desire to encourage rural economic development and improve living standards for marginalized, rural communities. However, evidence of the economic impacts of plantation forests are scarce. This paper helps fill this gap by exploiting quasi-experimental variation underpinning the expansion of forestry plantations in Chile. 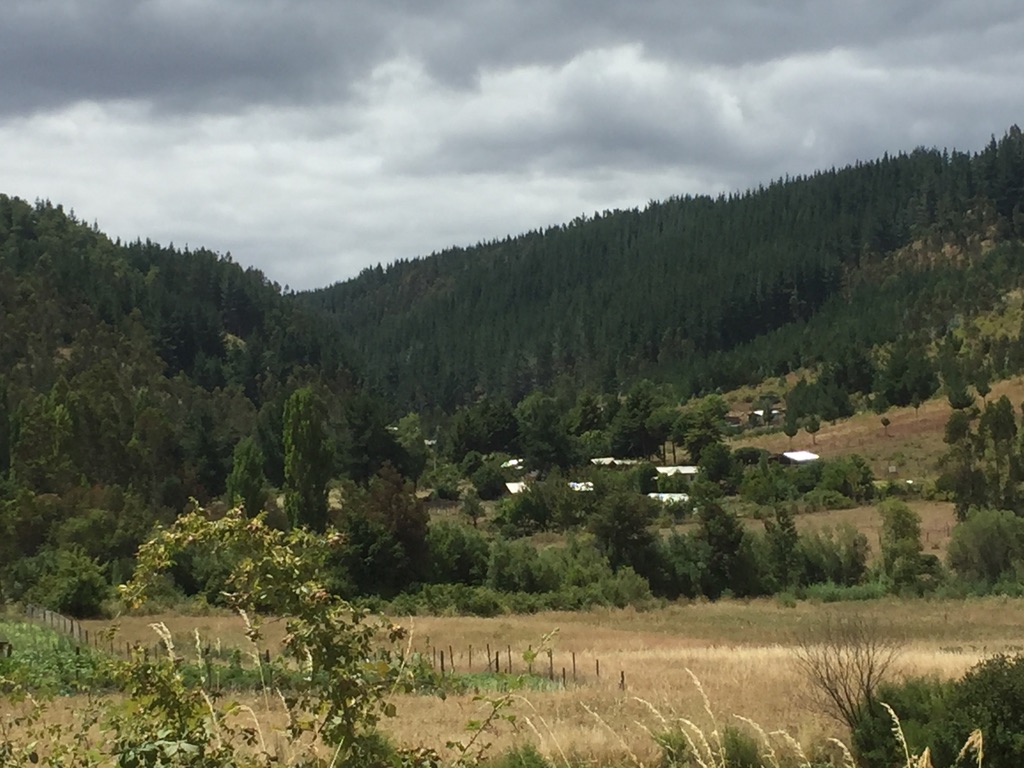 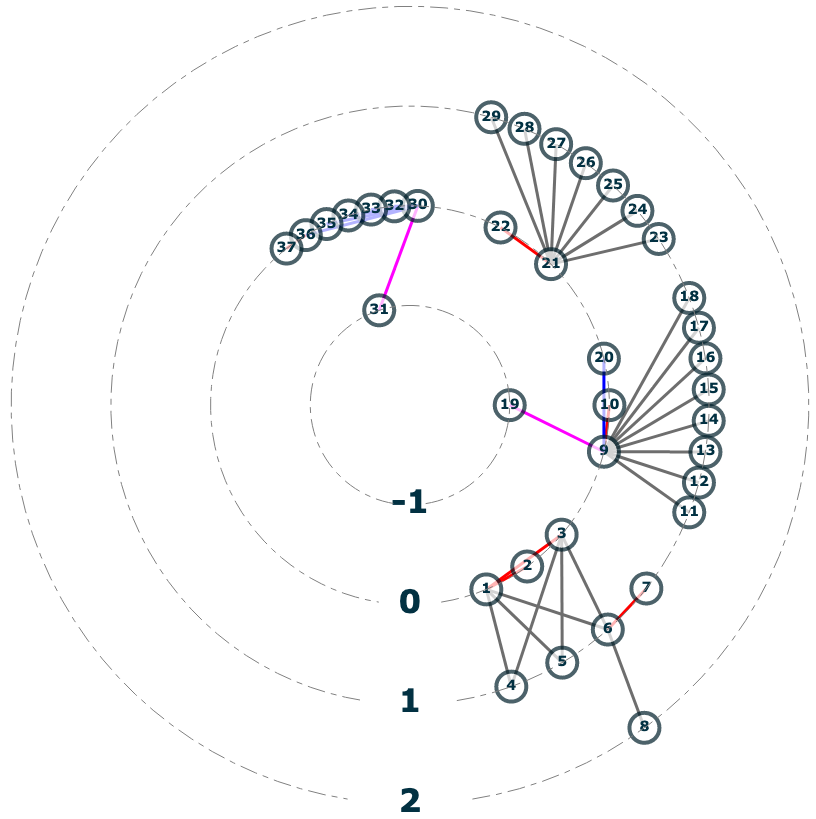 Representation of kinship structure of reservation at the time of forced settlement.

The persistence of social structure and status in indigenous reservations

Kinship systems have played a central role in defining individuals' positions within indigenous societies. This paper studies the evolution of the kinship system of Chile's Mapuche people since their forced settlement.

The rise of forest plantations in Chile's Mapuche's homeland: Four decades of land cover estimates from a CNN-RNN model and the Landsat program

This paper develops a CNN-RNN deep learning architecture that combines low resolution satellite imagery from the 1970s with modern contemporary satellite imagery to deliver state-of-the-art decadal land-cover maps for the core of Mapuche's ancestral territory. The results reveal that plantations sharply increased in the proximity of reservations since 1973. A large share has replaced native vegetation.

Evolution of land cover within five kilometers of reservations between 1973 and 2016. 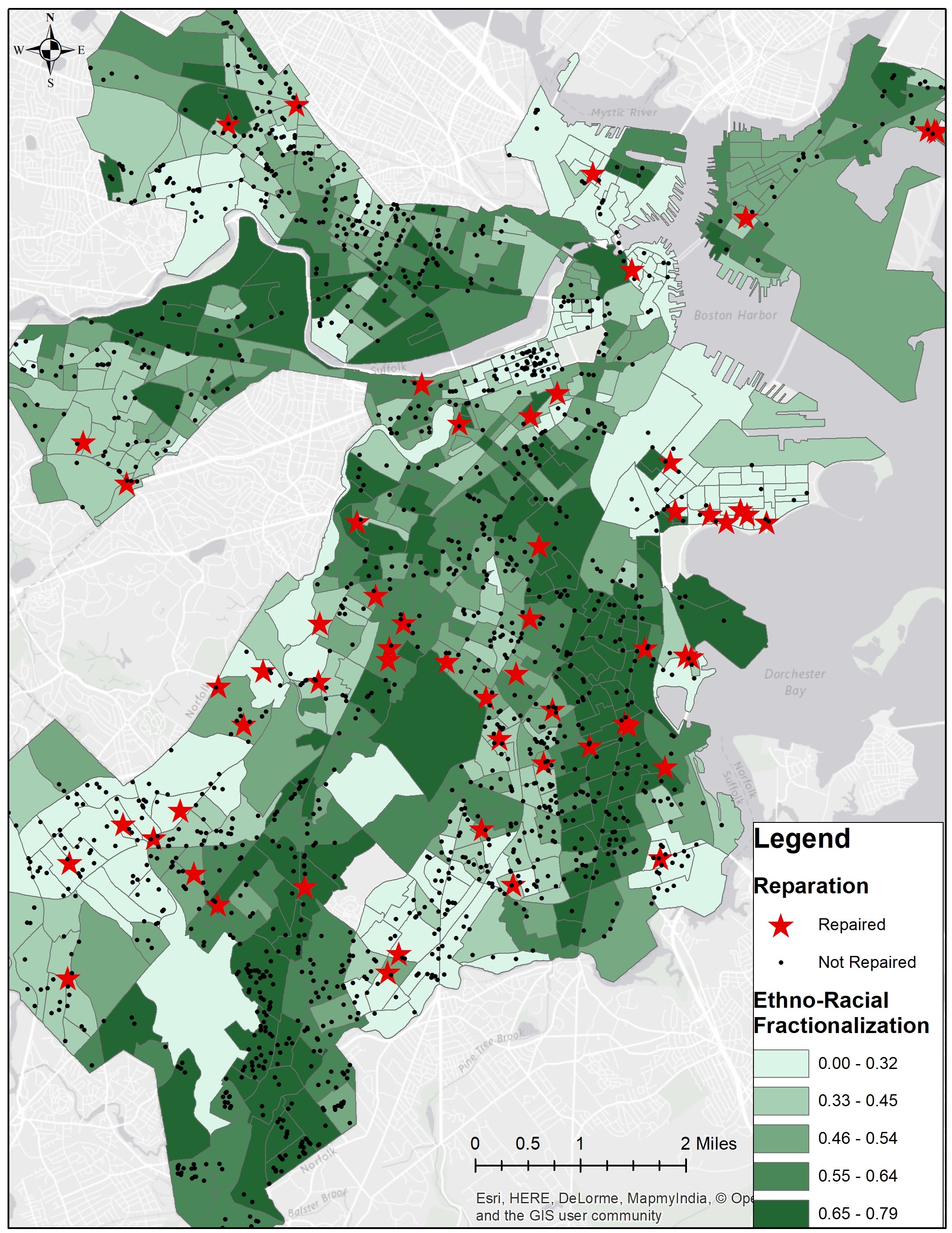 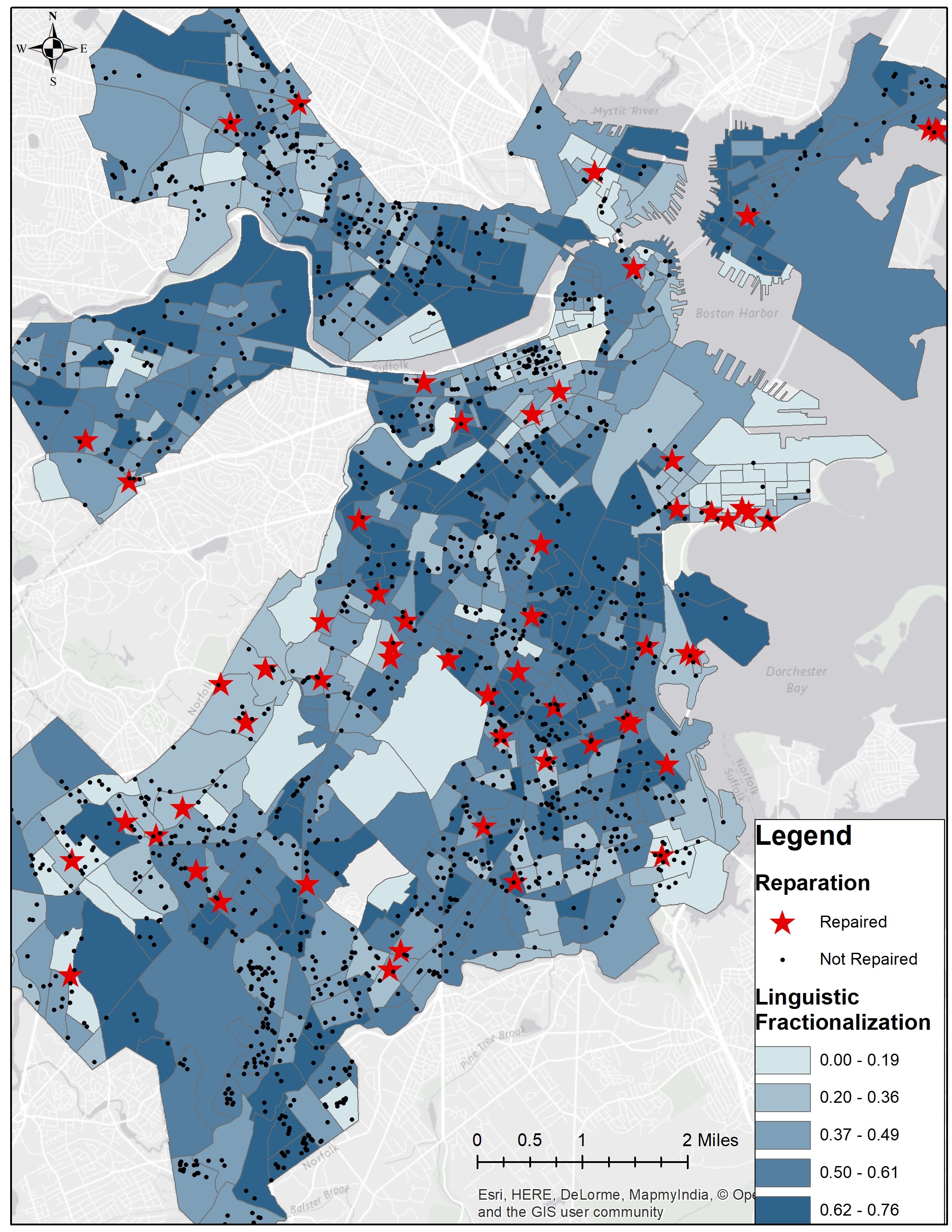 Distribution and reparation of gas leaks in Boston & Cambridge and Entho-Racial (left) and Linguistic (right) diversity.

The diversity we breath: Community diversity and gas leak management

Diversity in small-scale communities has been argued to difficult the management of common resources. We assess this hypothesis in the case of Boston and Cambridge regarding the reparation of gas leaks that degrade neighborhoods' amenities. Using geocoded data on 1,600 gas leaks in 2016 across these cities, we show that block groups displaying higher degrees of ethno-racial and linguistic fractionalization in the contemporaneous Census and American Community Survey enjoy a lower share of reparations of the local pool of leaks.

This paper aims at estimating the capacity of Supreme Audit Institutions’ (SAIs) audits to deter potentially wasteful year-end procurement spending. It also studies heterogenous responses to SAIs’ audits depending on whether agencies’ top managers are appointed through a competitive procedure or not. 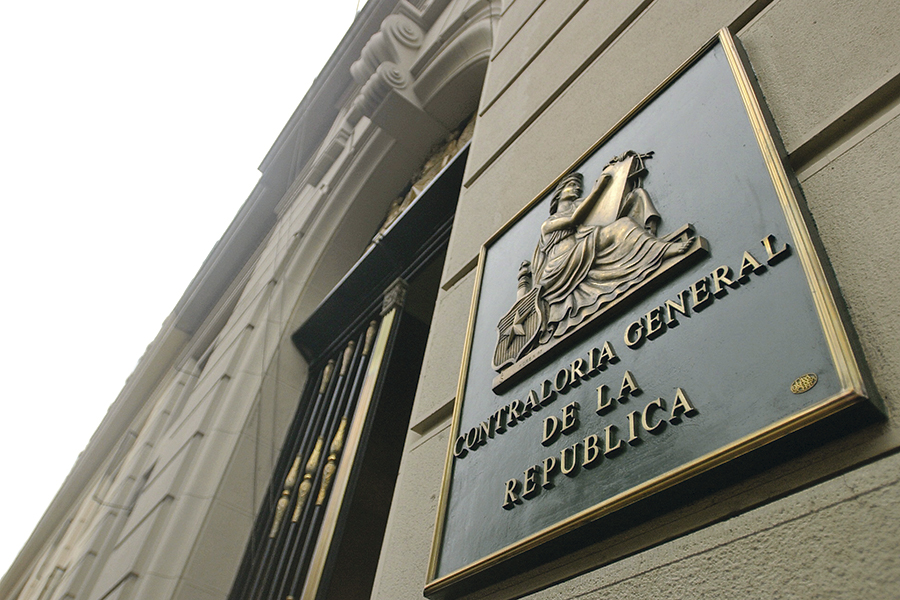 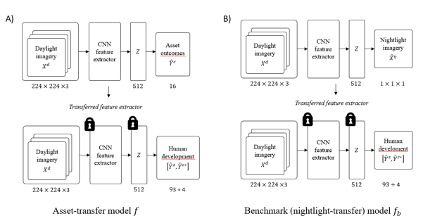 The application of deep learning methods to survey human development in remote areas with satellite imagery at high temporal frequency can significantly enhance our understanding of spatial and temporal patterns in human development. Most current applications have focused on the African continent and on predicting a narrow set of asset-based indicator of human well-being. This article leverages georeferenced village-level census data from across 40% of the population of India to train a deep-neural network that predicts 16 variables representing material conditions from Landsat 7 imagery. Based on the principles of transfer learning, the census-based model is used as a feature extractor to train another network that predicts an even larger set of developmental variables—over 90 variables—included in two rounds of the National Family Health Survey (NFHS).

The impact of sustained exposure to air pollution on children's academic performance: Evidence from a longitudinal study in Chile

This project studies the impact of sustain exposure to PM2.5 by leveraging individual-level administrative data from a standarized test applied to all school-attending children in Chile several time throughout their lives and annual estimates of average concentrations of PM2.5 obtained from Van Donkelaar et al. (2016). This large administrative data provides statistical power to detect associations that are expected to be quantitative small, but relevant for human capital formation when considering that it affects the entire population. Individual longitudinal data allow us to explicitly take into account the sorting of children in schools in our statistical analysis, an improvement from previous studies that have used school-level longitudinal data.

This project explores whether the different types of capitalism identified by the Varieties of Capitalism literature have systematic differences in their overall environmental impact, as measured by the Ecological Footprint Index of Consumption. It finds that the level of net public social expenditure as a fraction of GDP, and particularly the one that is not narrowly targeted toward workers, is significantly associated with lower environmental impacts for any given rate of economic growth in Western OECD countries. This result is consistent with the reported fact that Norther European countries, who have maintained the importance of universal benefits in their Welfare States, outperform other Western OECD countries. 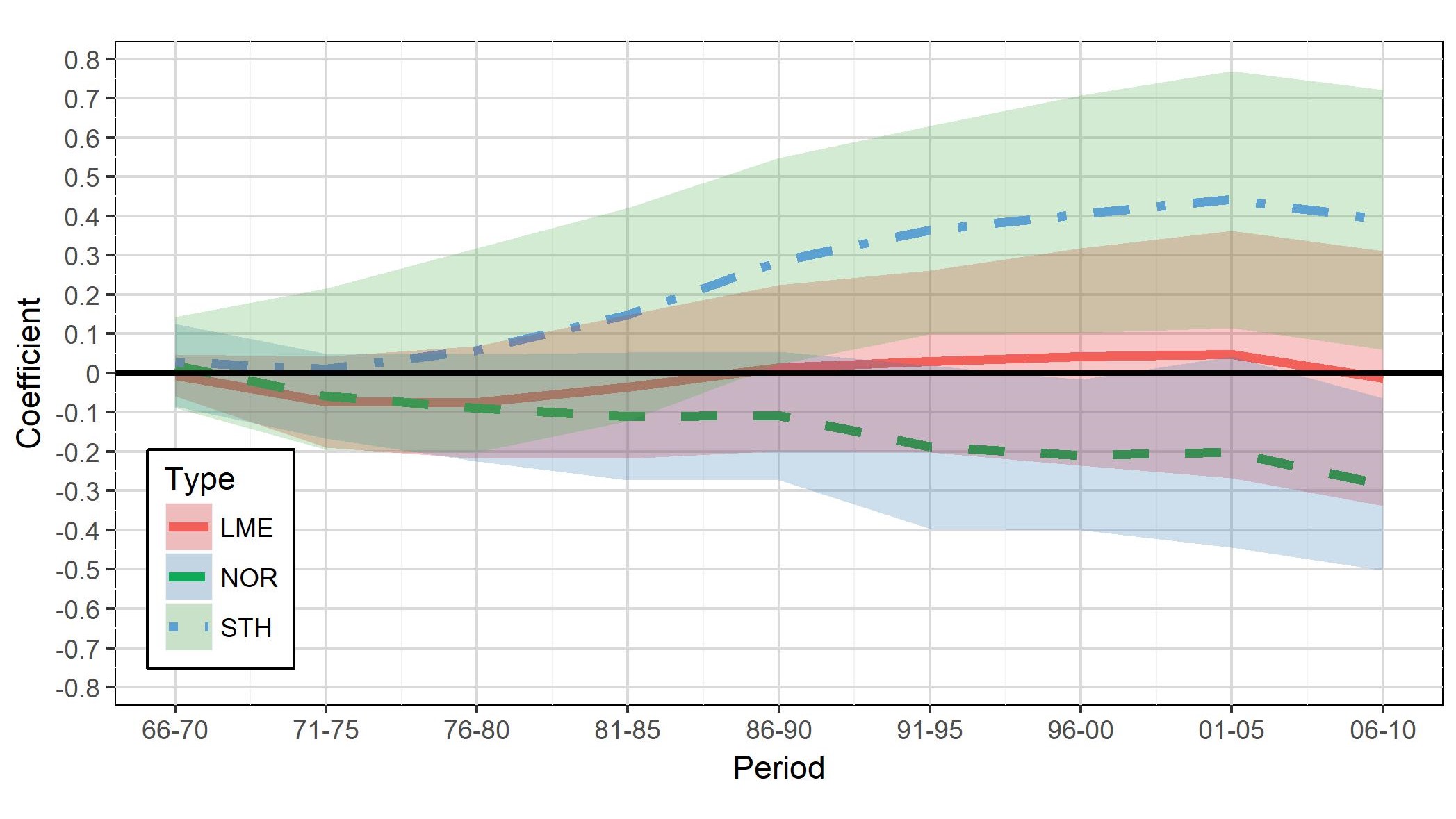 Relative evolution of the impact of economic growth on the environmental footprint between four groups of countries: Liberal Market Economies (LME), Northern European (NOR), Southern European (STH), and Continental European (CME). The later is the baseline group. 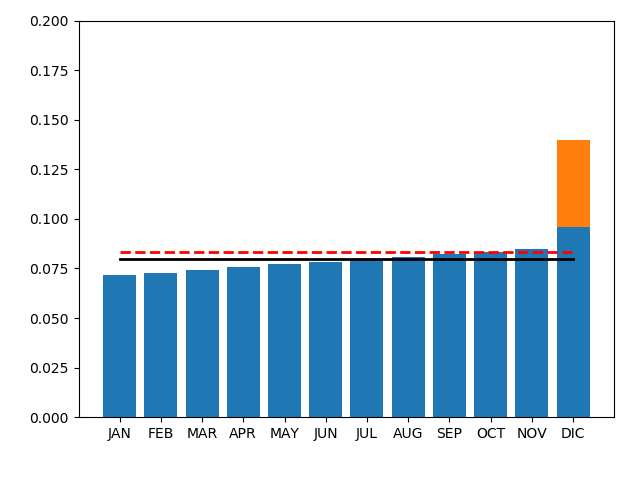 Model's simulation of monthly expenditure throughout the fiscal year.

The problem of year-end spikes in expenditure is well known, both in public and private organizations. The most common explanation argues that in organizations that operate with expiring budgets bureaucrats rush to spend any remaining resources before the closure of the annual budget to avoid future budget cuts and losing their agencies' monies. Although simple, this behavior is not easy to reconcile with bureaucrats being rational agents. If they know in advance that the budget will expire, why they wait until the end of the year to spend it? In this project I develop a theoretical model that offers an explanation to this puzzle. In the model, public servants are present-biased. When spending the budget throughout the year the public servant exerts a costly effort, which may only bring benefits to her at the end of the fiscal year when her performance is assessed. As a result, she procrastinate through the year and rushes to spend the monies before the closure of the budget to avoid a bad review. Given this behavior, expiring budgets are a sensible second-best solution; otherwise procrastination would extend beyond the fiscal year.